The peaceful lynchpin duchy of Plandra is under threat. Its quasi-arboreal ruler is starved of his esoteric earths, sedition is rife, assassins glint in the shadows and green ink is everywhere! The quest to restore stability takes you to the Rainbow Badlands, across the precipitous face of The Wall and into the very vaults of the hump-backed sky!

Fronds of Benevolence is a chapbook adventure for TROIKA! best suited for groups of 4 to 6 characters.

In order to download this adventure you must purchase it at or above the minimum price of £10 GBP. You will get access to the following files:

Fronds Of Benevolence is a 48 page Troika adventure that crackles relentlessly with both Troika energies and old school vibes.

Structurally, Fronds is a pointcrawl for a moderate-sized group, lasting for roughly two meaty sessions of play. It sort of wants PCs created specifically for it, but it's possible to work into a campaign if you you plan for that. It's also very gallivant-y. Fronds wants you to move from beat to beat without lingering too long on anything, and it benefits from a slightly lighter, wackier tone than osr adventures often prepare people for.

This probably won't be a problem for every group (at least partly because the adventure is still fun if you fail it,) but you may be able to circumvent this issue by simply making the timer visible to the players.

Content-wise, Fronds is extremely lush and fun. It's a fetch-quest to save an ailing ruler, and that framework is solid, but it misses no opportunity to hit weird and enjoyable beats. It also gives players a lot of choice, going so far as to branch significantly right at the start, and letting the GM have a pick of different optional encounters for each area the PCs wander into.

Overall, if 'bizarro picaresque' is a phrase that makes you sit up and pay attention, this adventure is for you. Honestly, all of Troika is for you. Fronds is probably runnable with other osr systems with a bit of work, but if you like Troika you'll like it, and vice versa. 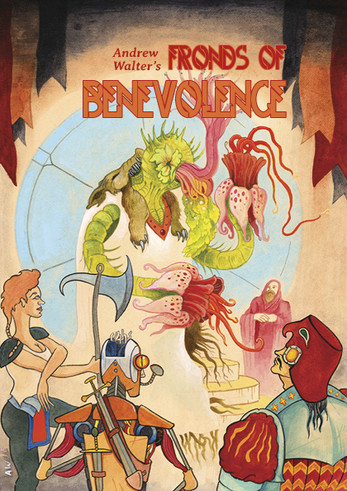 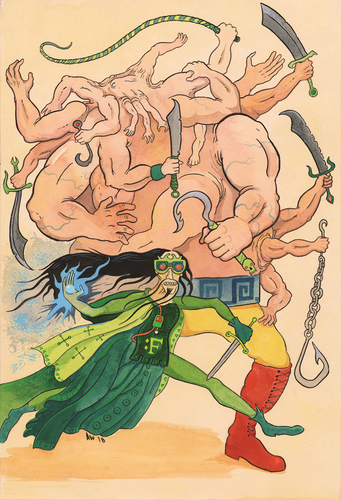